Ribbon Box Cakery: Serving the community, one cupcake at a time

On the day we met Denene Keifer of The Ribbon Box Cakery, she had just finished baking 26 dozen cookies that a customer had ordered only that morning. Although the order came with almost no notice, Keifer and her team simply rolled up their sleeves and went to work. Far from an inconvenience, Keifer saw the call as a blessing.

“It was a low week and when he called and ordered that we all looked at each other and smiled because it’s like, why do we ever worry?” Keifer said. “We should never worry because it always works out. It’s a God thing. It really is.”

Keifer’s positive attitude and incredible work ethic are part of what makes The Ribbon Box Cakery such a beloved staple of Marysville’s uptown district. The bakery has made cakes for countless residents while livening up the district with its tantalizing smells and enticing window displays.

A bakery is born

The Ribbon Box was born after Keifer and her longtime friend decided to quit their day jobs to pursue their dream jobs.

“I was working in the school system and although I loved the job I was doing, a friend and I would just dream up things we would do if we weren’t there,” Keifer said. “So one day we just said ‘Let’s do it. Let’s just try it.’”

Eight years later, that dream is thriving, due in part to the passion of the people behind the business, and their belief in something bigger than themselves.

“It did feel like it was something we were driven to do,” Keifer said. “It’s something we can do to bring joy to people and that’s really what it’s all about.”

With that mission in mind, Keifer and her friend opened up shop in November of 2008, in the midst of the recession. Perhaps due to the economic climate or the area’s history of quick turnover, Keifer said many in the community were skeptical of their business’ ability to stick around.

“A lot of people were like, ‘Well, how long are you going to be around?’” Keifer said. “They really didn’t have faith that we would stick with it, but we did.”

Although the bakery is now a well-oiled machine, Keifer said getting her business up and running was anything but easy.

“It was really, really hard,” Keifer recalled. “It was a lot of long hours, with some tears and some stress, but we d

After a few years in business together, Keifer and her friend went their separate ways. Although Keifer said it was difficult parting with her business partner and friend, it ultimately allowed The Ribbon Box to grow.

“I hired three people almost immediately,” she said. “We’ve really become a little family. The five of us have been together here for five years and we’ve hired since then.”

The team has had their ups and downs, but ultimately, they all love the joy they can bring to the community through their creativity and teamwork.

‘We really do feel like it brings joy,” Keifer said. “When people walk in and they smell the cakes, you can tell it brings joy.”

Connecting with the community through baking

Part of Keifer’s interest in starting a bakery stems from her background in cake decorating. At age 18, a friend talked her into taking a cake decorating class and she continued decorating cakes as a way to make extra money from home after she had kids. But she never expected it to turn into a business.

“It really wasn’t a dream of mine from the beginning, because I’ve never been a ‘business-person.’ I’d give everything away if I could,” Keifer said. “To charge–especially what we have to charge–is hard for me, but then I justify it because that’s six jobs!”

The bakery also supports the community in the form of donations and fund-raising events.

“Last year, we did a fundraiser and it ended up being on the news which I never expected or necessarily even wanted,” Keifer said. “After that, we had a gentleman call and say ‘I saw this on the news and I want a dozen cookies. I can’t come in today, but can I pay and just pick them up sometime?’ He came from Grove City to get a dozen cookies just to support that. That really touched me.”

Given the bakery’s success, it’s no surprise they’ve attracted loyal fans in the years since they’ve opened.

“We’ve met a lot of wonderful people. We have a lady that started coming here eight years ago, and we just went to her 50th birthday party,” Keifer said. “She wanted us all to come.”

The Ribbon Box is also getting noticed by the large corporations that call Union County home. 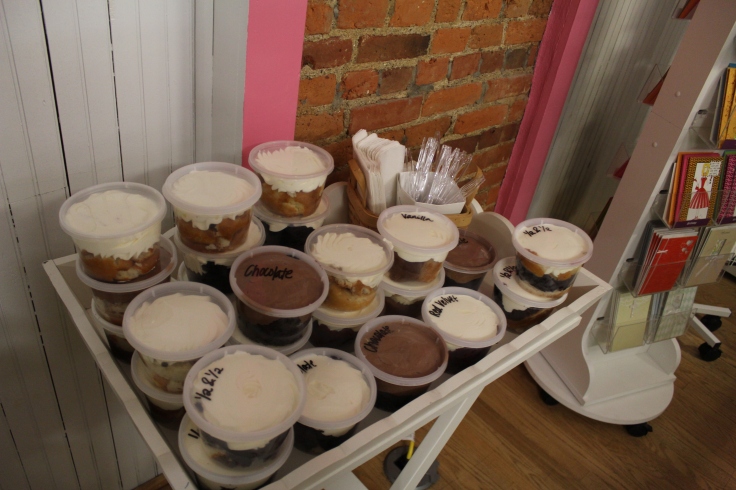 “Honda was opening a new building and they wanted me to do a version entirely out of cake. I was so worried about it collapsing!” Keifer said with a laugh. “It was a $2000 project for us and a solid week of work.”

Despite the difficulties, Keifer said the project was rewarding – and led to more projects.

“They made the biggest deal out of it and I was really proud,” Keifer said. “Then, they called us and wanted individually-wrapped sugar cookies designed like their newest sports car.”

Keifer said she started making the cookies with her own cookie cutters, but Honda wasn’t quite satisfied.

“They said ‘Oh, that doesn’t look like our car.’ They went down to their weld department and made me two of the heaviest duty cookie cutters I’ve ever seen,” she said with a laugh.

While the bakery has seen huge successes, it’s these personal connections and workings of fate that Keifer appreciates the most.

“Even just the order of 26 dozen cookies this morning. We usually have 30 cake orders for Saturdays. This week we had four. And then this morning when he called, I thought ‘That more than takes care of it.’ And to me, that’s wow.”

A place to call home

Visitors who stop in to the bakery will immediately notice the sweet aroma of cakes, cookies and frosting that fills the air. The next thing they’ll notice is the eclectic gift shop.

Stuffed animals, dog treats and handcrafted items line the shelves, most of which are made by Union County artists. A booth that once stood in Keifer’s great-grandparent’s Italian diner provides a place to sit and a great conversation starter.

The Ribbon Box is located on Fifth Street, in the heart of Marsville’s historic uptown district. To Keifer, the location is ideal.

“We love being uptown,” she said. “We love the feel of it, we love the building. I wish more businesses would stick around. I’d like to see it thrive.”

The bakery receives a good deal of foot traffic and Keifer wishes more business owners would join her uptown. She advises anyone who opens up shop uptown to hang on through the first five years.

“I never really believed it would be a big difference after the five-year mark, but it is a huge difference,” she said. “You feel like ‘Okay we’re making it, we can keep doing this.’” 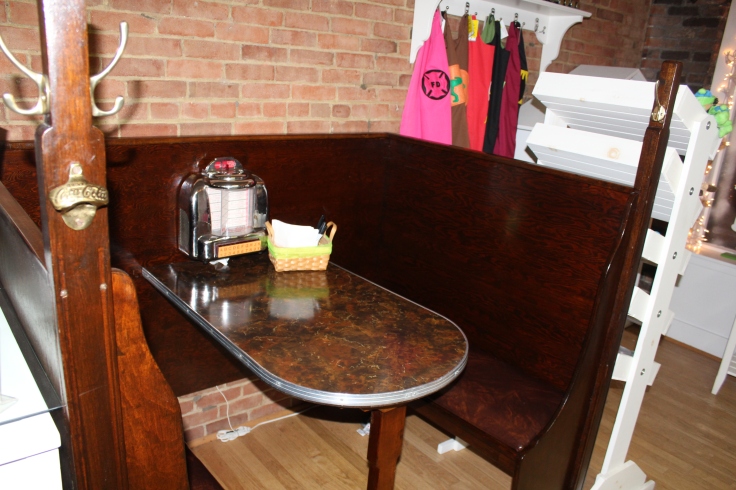 Theresa is a local real estate agent in Marysville, Ohio. Consider her your Marysville expert! Contact her at tscheiderer@kw.com.

One thought on “Ribbon Box Cakery: Serving the community, one cupcake at a time”